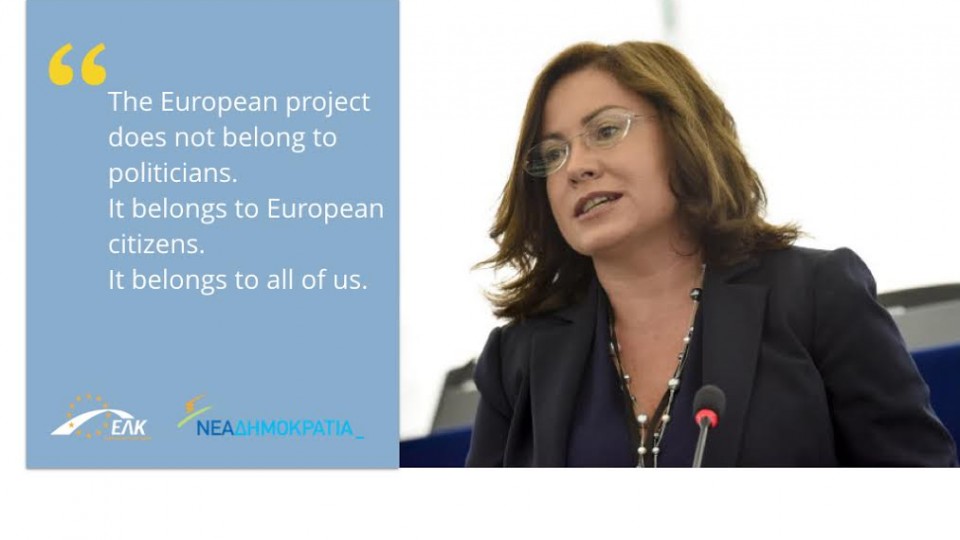 Good morning.
Your Excellency, Mr Prαts Monne, Κύριε Ασιμάκη,
Ladies and Gentlemen, Dear Friends,
It is an exciting task to address an audience of young Europeans — an audience of skilful young professionals that represent the future of our continent.
Firstly, I would like to thank the organizers who, every six months, work very hard to put this event together. It is an honour to welcome a group of highly qualified young Europeans who are taking an active interest in the life of our Union.
A group of people that will one day be called upon to take the European project forward.
A group of people whose arrival to Brussels coincides with the arrival of the new European Commission as well as with the arrival of many new Members of the European Parliament
Including myself
When I received the invitation to speak to you at this welcome conference my first thought was that I should explain to you how the EU bureaucracy works. The role of the Commission, the Parliament and the Council
But I think I’m going to skip this part.
I am sure that over the next 5 months, working for the EU institutions you will find out yourselves about the balance between the Institutions, the role of a Commissioner, of an MEP, or of a Director General. If you have not already run a search on Wikipedia;
Now, I know there is one thing all young people like, and this is short speeches.
Today, I will try to share with you my thoughts about what I think Europe needs.
In as few words as possible.
Dear friends,
These are challenging times to be in European politics and no less so part of the European governance.
As Europe is emerging from the deepest crisis in 60 years, the greatest challenge for all of us is to reunite it.
This is my third month as an elected member of the European Parliament. And I spent the past few months, before and after the European elections, campaigning around Greece, listening to people.
Many of my older colleagues, if you asked them, would tell you that these are difficult, yet challenging times to be in European politics. I will agree with them.
The same colleagues, older and more experienced Members of the European Parliament, would also tell you today in this ‘Welcome Speech’ that Brussels and the European Institutions are the brains and heart of Europe.
I wish I could agree with them.
But I will not!
Not with the whole statement.
Europe needs to change.
Brussels and the European Institutions may indeed be the brains of Europe.
But we need to work hard to find for the EU a place back in the hearts of the European citizens.
Because many Europeans fail to see beyond the huge glass buildings of Brussels.
They fail to understand what is going on inside the Brussels bureaucracy.
We need to become more efficient, more transparent, more political.
The new President of the European Commission, Jean-Claude Juncker, has already set out a plan towards that direction. By setting core priorities, by focusing on jobs and growth, by changing the structure of the College of the Commissioners, with the introduction of clusters, he is striving to make the bureaucracy of Brussels more functional.
These days we’ve been holding in the European Parliament the hearings of the Commissioners designate. I am happy to say that for the first time in years this is a very political College of Commissioners.
This is a one off opportunity for the EU institutions to produce concrete results, find solutions where they can be found, and be visible in the periphery of Europe. We need to be visible and accountable to the citizens outside the Brussels Bubble.
We have with Juncker’s new team the opportunity to go forward. And if we miss it this time, there will be no excuses.
Europe needs a fresh start.
These are challenging times, because we are facing acute problems:
First and foremost, youth unemployment
There are millions of young Europeans who are outside employment, education, or training. This is simply unacceptable.
Further, geopolitical tensions have brought turmoil and armed conflict to Europe’s neighbourhood.
It is more important than ever that Europe stands united and strong in its commitment to peace.
While moving forward on our internal priorities we should not lose sight of our external responsibilities.
Geopolitical tensions have also highlighted our own shortcomings in completing the internal market and promoting growth in Europe, in particular in the fields of energy and the digital market. By breaking down internal barriers and building our economy together, we can be more resilient to external shocks.

A small minority of Europeans voted for extremist and populist parties in last May’s European elections. They voted for an empty chair in the European Parliament.
For it is easy to be an extremist. It is easy to talk and fail to act. It is easy to destroy.
But it’s a lot harder to reform.
To face the challenges and find solutions
To restore trust and stability, while showing solidarity
This difficult task of resolving problems is reserved for responsible citizens.
As politicians, we are called upon to create the policies that will encourage job creation and growth.
Jean-Claude Juncker, the new President of the European Commission, in his inaugural speech in front of the European Parliament, last July, pointed out that in Europe we have 29 member states. The 29th member state is that of the unemployed and those excluded from the labour market.
In Europe more than 6 million people lost their jobs during the crisis. In Greece alone we have more than 1,300,000 people registered as unemployed. About 734,000 of them are under the age of 25. These people urgently need to be given an opportunity. They need an opportunity to enter the labour market.
Let us not create the illusion that we, politicians, can automatically create growth and jobs. Jobs are created primarily by entrepreneurs who take risks.
What we, as politicians, can do, however, is create a business friendly environment
An environment in which start-up companies don’t have to leave Europe for other markets, taking with them millions of prospective jobs
Let us - finally - stop ignoring the fact that in Europe small and medium enterprises provide two thirds of all jobs in the private sector.
So let us keep our promises, let us lower taxes for SMEs, let us give young people the opportunity to innovate and create jobs.
On fair terms, all over Europe
What we politicians can do is legislate wisely, put forward priorities that will make a difference in the real economy.
I just told you we should young people the opportunity to innovate and create jobs.
But in reality there is a lack, in the innovation ecosystem, between innovative research and innovative research projects that actually reach the market.
We need stronger cooperation
We need to get rid of the silos between the major stakeholders
We need in Europe to become team players.
A good example is the Digital Single Market.
I recall the late 1980s and the early 1990s. Most of you were very young, maybe not even born yet.
Those days we were pioneers. We established the common market for products.
We adopted the GSM, a European innovation with global impact.
Unfortunately, today, when it comes to the digital single market, we risk missing the train.
In terms of competition with the US for instance we need to overcome the fragmentation of the single market in 28 national markets. The US has 300 million consumers.
If Europe was a single market we could have 500 million consumers. Of course there are language barriers we have to take into account when making such calculations.
But the point is, even before we seek ways to overcome those barriers, we will first have to complete the institutional framework to exploit our competitive advantages.
The Digital Single Market can translate to 500 billion Euros over additional growth, over the next 5 years, which is the mandate of the Juncker Commission.
It would be a shame to miss this opportunity.
Once again: Fewer silos, more cooperation.
In geopolitics too, we cannot simply wish the world’s problems away.
Facing new challenges and regional instability, Europe needs to remain united, if it is to remain strong.
One important way to build a stronger Europe is to promote the completion of the internal market, in particular with regard to energy.
Our energy supplies rely too heavily on energy imports from politically unstable regions. We import 53% of the energy we consume, at a cost higher than 1 billion a day.
And in many Member States the supply depends on one single external supplier.
This is why we are working toward a true Energy Union built on increased interconnectedness: to ensure secure and affordable energy for all member-states.

Affordable energy will help growth and job creation across the Union. Greater security of supply will mean the burden of the tough foreign policy choices we have to make is shared equally between our member-states. Energy Union is an essential building block toward a more dynamic and stronger Europe.
Meeting the economic challenges is equally important for all European countries.
In the North and the South.
I was reading an analysis by Mr Fratzscher, the Head of the German Institute for Economic Research, on the Economist, just a few days ago.
We have to accept that Germany’s, for instance, export success came not from greater productivity but from holding down wages. Meanwhile, much of the country’s non-traded service sector is notably uncompetitive. And credit for closing the budget deficit goes mainly to big tax receipts that came with high employment.
Evidently, high trade surpluses for some countries come at the expense of low wages and low spending. And I will add at the expense of high trade deficits for their trade partners.
Meanwhile, coming from Greece, the country emerging from the deepest economic crisis we’ve seen in Europe, I can assure you, we have finally managed to resist the alluring illusion that growth can be built on debt.
New debt would just place the burden on our children. We have done it the hard way, because the simple truth is that there was no other way.
The work is still far from over, but the results are starting to show. Trust is coming back to Greece. The country is again becoming competitive, creating jobs, and will soon return to economic growth.
Thanks to the huge sacrifices of the Greek people we managed, some time ago, to reach the markets. By the end of this year the IMF will leave the Greek program. As President Juncker has highlighted, we need truly European solutions to deal with the debt crisis. We must all work towards that direction.

We need european policies that foster job creation, regional stability, secure and affordable energy will be important in supporting the recovery all over the European Union.
As elected lawmakers, it is our duty to work night and day for a Europe where the economy returns to growth, and where entrepreneurs can create decent jobs.
A Europe that will again offer opportunities to young people.
A Europe that promotes its values of peace and the rule of law, both in the region and abroad
A Europe we can all be proud of.
But the European project does not belong to politicians.
It belongs to European citizens.
It belongs to all of us.
This is why we all need to join forces to make this Europe possible.